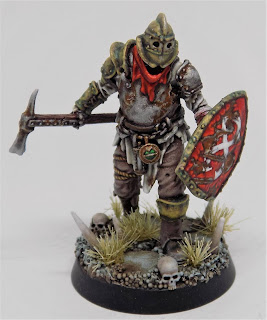 I remember a time when I would get excited about new releases by Citadel Miniatures.  This faded as GW largely moved away from the sort of things that interest me, but every now and then I find a new range or miniature creator that rekindle that excitement.  One of those I have discovered recently are the models by Bestiarum Miniatures.

I don’t know much about the background of the world of Bestiarum, but they create some of the most characterful, crazy, dark and sometimes disturbing models I have seen for some time.  The only problem is they don’t produce ‘physical’ miniatures. but sell their ranges as files for 3D printers.  Now, I am a luddite and most technology is beyond me so 3D printing is a mechanical sorcery that frankly terrifies me!  Thank goodness for places like Etsy and eBay where licensed sellers can be found, sometimes providing this type of mini at a reasonable price.

Otto Long Arm is the first Bestiarum mini I have purchased.  I’m going to be sensible this time and only buy new ones as the last model is finished… that also encourages me to paint them faster.

And I need that encouragement.  This is the first model I have finished in over 18 months. 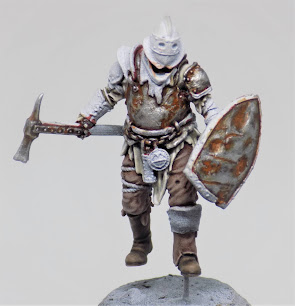 But what a model.  Very little cleaning was required, I wasn’t tempted to convert him… just a wash, build and undercoat (White over grey over black).  The colour scheme was rather guided by the helmet, which I though was similar to a Roman Gladiator – a bit of research meant that Otto here was going to be in armour which was partly gold / bronze colour and there would be some red areas. 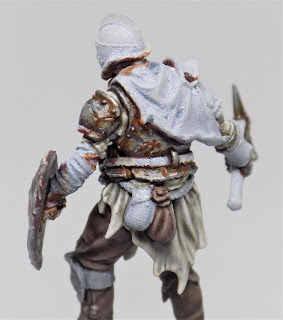 Otto might once have been great, but I figured he had spent some time on some crusade in this hellish underworld – his clothing is tatty, he has bandages and damaged armour.  He’s not been able to repair what he set out with, and has picked up replacements where possible – this meant a lot of his armour would be a more conventional iron colour with plenty of rust.

I started on the inside and worked outwards, so the clothing and rags came first… earthy, dull colours, largely using Vallejo paints.   Then the metal, also Vallejos with plenty of rust created using sepia ink, Modelmates’ Rust Effect paint and a little GW Ryza Rust.  I painted all of the metal shield at this point as I wanted lots of damage and chipped paint – painting all of the metal now didn’t take much longer and gave me more freedom when it came to painting the design. 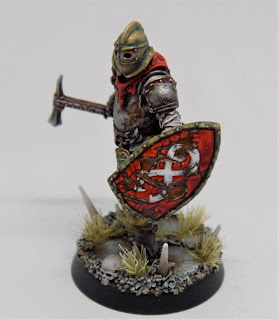 The shield was painted a Gladiator-esque red with plenty of battle damage – let’s face it, Otto is a skilled warrior and most of the time the enemy’s blows should be landing on his shield!  Then came the design; I knew enough that in the Bestiarum world Otto’s enemies are called the ‘Corrupted Ambrosia’, so I figured that Otto’s symbol would be a (non-corrupted) Ambrosia pattern.  A little Google research showed that Ambrosia has an astrological sign, a bit like the infinity symbol with the top missing… perfect!  This was added to the shield, but I wanted the symbol to be fading, broken, a symbol of Otto’s sanity and resolve.  One day, after more battles, the symbol will be gone and Otto will succumb to the corruption. 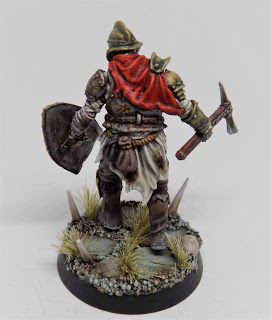 The remaining armour was painted in the gold/bronze colour (GW paints this time) and as a further nod to the Roman Gladiator I only painted in this colour those armour pieces that would have been worn by a Murmillo – right arm and shoulder, knee, helmet and edge of the shield.  Again you can see the armour is tainted by the environment. 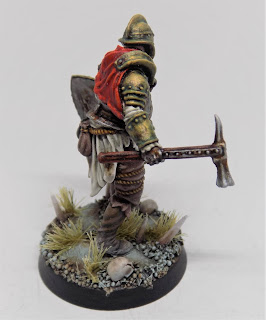 The only two items that are not damaged, worn or corroding are the two relics tied to Otto’s belt.  These represent his courage and strength so are bright, with some green spot colour.  More vibrant than the rest these embody the glimmer of hope that our brave warrior will prevail.

Normally my bases would use fine sand or mud, but this I went for coarser tiny stones.  Otto is in a brutal environment, not the sort of place you’d go barefoot, so I used something grittier to make it seem that he was walking on a surface that felt like lego blocks.  Nasty.  Pale and ashen with a few stone slabs and bony spikes (balsa and cocktail sticks for a bit of texture) plus a couple of skulls and some anaemic looking grass - you’d not want to stay there long.  When painting the base I also drybrush some of the colour onto the feet of the model… far too often do you see models with strangely clean shoes! 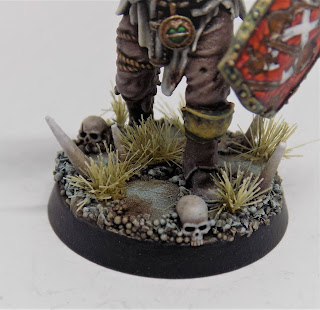 Not really my finest work but a nice start after such a long break.  I enjoyed painting this model so much I’ve picked up a bit of the painting bug again…  The next Bestiarum mini is already on order…

I hope you find these blogs useful – there are many other pages and sites that tell you what paints to use and describe the techniques to get the colour on the model.  I want mine to be a bit different, to describe the thought processes and background of the creation of my artwork.  If it helps you to think a bit differently as you build and paint and enables you to improve your work, then all the better 😊

Thanks for reading... thoughts, tips, questions and comments are welcomed!

I remember a time when I would get excited about new releases by Citadel Miniatures.   This faded as GW largely moved away from the sort of ...

Chris Blair
I paint miniatures... not as much as I used to! I've won the odd award here and there, and apparently people might be interested in what I have to say!!